U.K.-based train ticketing provider Trainline (TNLIF, TNLIY) released its half year results along with a trading statement last week. On the basis that they weren’t as bad as feared, they were well received and the stock traded slightly up afterwards. However, I think the results simply serve to underline the vulnerabilities in the company’s business model and retain a negative outlook on the name.

The revenue picture was that revenues fell markedly. These results run for the six months to the end of August, so in the company’s key market of the U.K., they only get a month or so of regular trading before travelers started to shift their behaviour in March, during which lockdown started. There were several months at the end of the period when lockdown restrictions in most parts of the U.K. were lifted. Clearly, COVID-19 and lockdown reduced travel volumes dramatically. Nonetheless, I find the revenue figures weak. 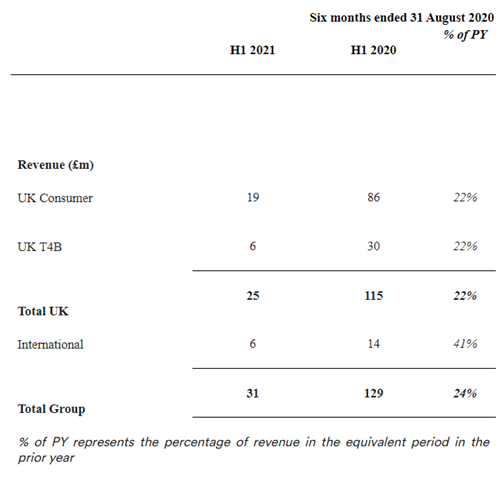 There are a couple of points worth calling out. First, I suspect that the revenue fall for Trainline was greater than for train travel. It is hard to know, but February and part of March ought to have been close to 100% for train travel versus prior year, while recent reporting from train companies has suggested around 35% of usual ridership in August, July and parts of June. However, the Trainline model doesn’t track train travel: season ticket commuters spending thousands of pounds to take the train between the Home Counties and the City, for example, are most likely to purchase their tickets at the station. Trainline is used by customers (such as myself, who travelled on a Trainline purchased ticket today for this very purpose) for discretionary leisure trips. A time like now when such trips are limited, with many people adopting a wait and see attitude to discretionary travel for the time being, shows the vulnerability of relying on this discretionary market, which is that it can largely vanish overnight.

Additionally, Trainline’s revenue fall looks dramatic compared to that of train operators in the U.K. That is because the government has been willing to provide financial support to train operators to run services even where passenger demand is very weak. Trainline does not enjoy such a financial privilege – if customers don’t travel, it doesn’t make any money from train services running.

Even though the period saw unusually depressed demand and hopefully that won’t recur – although it could, with for example 10 million people now under local lockdown again in the U.K. – the headline revenue figure is striking for its smallness. The company has been selling tickets online for over two decades, but its revenue in this half year (not the transaction value, but the revenue for the company which in many cases is effectively a commission) was just £31 million. For a company with a £1.9 billion market cap which has been building sales for so long, that is shockingly low.

The Company was Lossmaking, Problematically for its Debt Service

The word “debt” didn’t appear once in the half-year results.

In April, the company guided that monthly cash outflow from operating costs and capital expenditure would likely be c. £8-9 million. In fact it turned out to be less, which investors apparently cheered, but it remains a loss nonetheless. The company said that it expects to report an adjusted EBITDA loss for H1 FY 2021 of between £14-19 million. That is on an EBITDA basis i.e. excludes debt repayment. In its last annual report, the company had net debt of £71 million, which doesn’t sound high. However, in April, the company agreed a waiver of a covenant in its revolver that its net debt position does not surpass 3.75x adjusted EBITDA for the prior twelve months. That is already a high debt burden, and the fact that the covenant was waived suggests that the company was not confident of being able to continue to satisfy it. Again, that underlines a vulnerability in the company’s model, where its debt service ability hinges on profit generation which is so vulnerable to an external shock like COVID-19.

Additionally, the reason losses were less bad than initially guided matters. Marketing was paused, staff were furloughed, recruitment was frozen and staff pay reviews were deferred (we will see in the annual results whether this also applied to the company leadership). All of those can save cash costs in the short-term, but at the cost of business building longer-term. I think the company’s reasoning is understandable, but the growth story about expanding more outside the U.K., for example, will likely be somewhat delayed due to such cost cuts.

I contended in Keep Off The Tracks: Trainline that the company was overvalued based on its earnings potential in the short- to medium-term. The latest set of results accentuate that overvaluation. Although due to exceptional circumstances, the very fact that Trainline is so vulnerable to such circumstances points to some weaknesses in its business model, such as its reliance on a U.K. rail network which in policy terms clearly treats it as an outside. Continue to avoid.

Sun Sep 20 , 2020
Demetrio Perez, Jr., is publisher of the weekly LIBRE. The Miami Herald’s parent company on Saturday said “significant lapses” in procedures and oversight led to the distribution of “deeply offensive and racist content” in LIBRE, an independently produced weekly newspaper that was inserted each Friday in el Nuevo Herald for […]