In a matter of weeks, the US Postal Service has gone from a regular staple of American streets to a full-blown national discussion, where the debate centers on its very livelihood in years to come.

But many tangential arguments about the fate of the Postal Service circle back to one big question: whether we, as a public, need it to function as a business or a service. Right now, it does a lot of both.

In mid July, newly appointed US Postmaster General Louis DeJoy introduced wide-ranging cost-cutting measures that thrust the US Postal Service into a political maelstrom and made its coronavirus-fueled funding crisis front-page news. The operational overhaul earned DeJoy blowback from lawmakers and citizens who were concerned the changes would delay the mail and put November’s mail-in ballots in jeopardy.

In the wake of the new policies, which the Postal Service announced it would walk back last week, Mark Dimondstein, president of the American Postal Workers Union, discussed the very nature of the Postal Service with Business Insider.

But when you take a hard look at the Postal Service, it’s structured to function both as a business and as a service — often having to grapple with the worst aspects of each. The challenge of operating simultaneously as a revenue-generating enterprise and a public good — with pressures from the market on one side and pressures from Congress on the other — puts the post office in a difficult situation.

With that situation now in the national spotlight, the full spectrum of onlookers, from laypersons to postal experts, is calling for change. But many have vastly different ideas of what that might look like.

Make no mistake, the US Postal Service is a government agency; US Code classifies it as an “independent establishment of the executive branch.” However, unlike many other government agencies, the post office isn’t publicly funded and doesn’t take in any taxpayer dollars — a fact it’s immensely proud of.

The organization is designed instead to be self-sufficient and to cover its operating costs through the sale of postage, services, and other products (like crop tops, for instance). The post office’s roughly 550,000 career employees have collective-bargaining rights, and the service competes for customers’ business with private-sector companies like FedEx and UPS.

However, very much unlike its competitors, the Postal Service operates with a strict mandate from Congress and is boxed in by all manner of government regulations — it’s a federal agency, after all.

The Postal Reorganization Act of 1970 — which created the post office as we know it today — established the organization as a “basic and fundamental service provided to the people by the Government of the United States, authorized by the Constitution, created by Act of Congress, and supported by the people,” with the basic function to “bind the Nation together through the personal, educational, literary, and business correspondence of the people.”

The Postal Service is required by law to deliver mail to each and every address in the country for a low, standard rate. Except for extenuating circumstances, it can only raise rates to account for inflation.

Since it legally must deliver mail even to the most far-flung reaches of the country, the Postal Service is under pressure to maintain rural post-office locations that aren’t cost-effective to run. Meanwhile, private outfits like Amazon, FedEx, and UPS are free to charge high fees to ship to addresses that are too far from major hubs, or simply pass their packages off to the post office.

Those companies depend on the post office for last-mile delivery to remote areas because it’s not profitable for them, and the post office instead takes the hit. Amazon, for instance, operates a vast and growing delivery network but only focuses on the nation’s densest — and therefore most lucrative — areas, according to a report from Morgan Stanley, leaving the low-margin routes primarily to the Postal Service.

Not to mention, aside from determining its basic scope of duties, Congress can also pass laws governing how the post office deals with nitty-gritty details of its business, like benefits.

The 2006 Postal Accountability and Enhancement Act (PAEA), for example, stipulated that the Postal Service spend the decade that followed dedicating more than $5 billion per year to a nest egg that would pre-fund retiree health benefits for decades to come. That highly unusual requirement hurt the post office’s bottom line and contributed greatly to its $161 billion mountain of debt and liabilities.

According to a report from the Postal Service’s Inspector General, the organization lost $62.4 billion between the 2007 and 2016 fiscal years, $54.8 billion of which was tied to pre-funding retiree healthcare.

Of course, the post office benefits in numerous ways from its status as a government agency. It enjoys a monopoly on first-class mail and the use of mailboxes, is exempt from certain state and local taxes, has a “revenue foregone” appropriation allowing free postage for both those who are blind and overseas absentee voters, and it can borrow up to $15 billion from the US Treasury at low rates, to name a few perks.

Proposals for improving the Postal Service run the gamut

Still, acting both as a government service and a self-sufficient business is a challenging proposition, as shown by private companies’ dependence on the post office to make their less profitable deliveries. That’s led politicians, pundits, and policy experts from across the political spectrum to propose structural overhauls, ranging from privatization to giving it a permanent bailout.

Kevin Kosar, a vice president of research partnerships at right-leaning, free-market think tank R Street, argues that the post office should continue functioning essentially as it currently does, but with fewer government restrictions, more leeway to change up its business model, and substantial annual subsidies from taxpayers.

“I think for much of the Postal Service’s modern history, starting in 1970 when they were made into this government corporation through 2008, it did a pretty good job of satisfying the multiple stakeholders,” Kosar told Business Insider.

Kosar said that, when times were good, the post office’s dual obligations didn’t pose much of an issue. But as mail volumes declined and revenues stagnated starting in the late 2000s, the organization wasn’t able to keep up due in part to strict government oversight. He proposes a seven-point plan to make the agency more competitive and financially successful, including reducing delivery to five days per week, giving the service the option to raise prices, freeing it from some of its healthcare-benefit obligations, and allowing it to rejigger its collective-bargaining laws.

There has also been a push on the right, fueled in part by President Trump, to do away with government constraints entirely and privatize the service, theoretically increasing competition and bringing better overall service to the shipping sector. The libertarian Cato Institute argues that Congress “should privatize the USPS, repeal its legal monopolies, and give the company the flexibility it needs to innovate and reduce costs.”

But opponents say that would drive delivery costs through the roof — especially for residents of rural areas — while eliminating an essential, low-cost service that millions of individuals and small businesses depend on.

Richard John, a professor of history and communications at Columbia University, argues that the post office is at its core a public good, and worrying too much about the amount of money it brings in is missing the point. He doesn’t see the “urgency” for the post office to run like a business.

The post office “lost money most years between 1851 and 1970, but it wasn’t really a burning issue … because it was understood to be a service,” John told Business Insider. “The idea that it should be profit-making or that it’s making a loss, and that that’s a problem, is a relatively new concern.”

Rather than moving to privatize the post office, John suggests that lawmakers keep the organization a hybrid and expand its duties so it can continue to serve the public good as it always has. Reintroducing postal banking and rolling out low-cost broadband access, for instance, would both be ways to rethink the post office’s role, while staying in keeping with the civic, nation-binding mission the Founders envisioned, John said.

Likewise, Dimondstein, of the APWU, argues that instead of reducing costs at the expense of service, the post office can improve its long-term financial outlook by broadening its horizons.

“There’s lots of things the post office can do to be even more relevant in peoples’ lives, and that would bring in revenue — whether it’s expanded financial services, licensing, electric charging stations in front of post offices,” Dimondstein previously told Business Insider. “There are many, many, many, many things that the post office can [do to] carry out its civic role in society, that they’ve done since a year before the founding of the country.”

With the pandemic raging on and a mammoth job to carry out, the Postal Service finds itself in a precarious financial position. Although an uptick in package deliveries has blunted the pandemic’s impact, a sharp drop in first-class mail, significant spending on personal protective equipment, and labor shortages have plunged the post office into a funding crisis.

The service reported $2.2 billion in net losses for the third quarter of 2020, and recently projected it could run out of cash as early as April 2021.

Amid growing concerns that financial strains and operational changes could put November’s mail-in ballots at risk, House Democrats passed a bill on Saturday that would send $25 billion in funds to the ailing agency and block the postmaster general’s controversial, cost-cutting initiatives. But the bill will likely stall in the Republican-controlled Senate.

The Postal Service, for its part, voluntarily suspended the changes until after the election, and insists that it’s equipped to handle the forthcoming flood of mail-in ballots.

As far as a bailout is concerned, John wonders whether politicians can put a price on democracy — referring to concerns that, without the post office running at full steam, the legitimacy of November’s election could be called into question.

“We do have a pretty good gig going here, going back to the 18th century, and I’d like to see it prosper for a few decades longer,” John said. “And beyond that, who knows.”

In new model for media, Globe signs subscription and events deal with Biogen 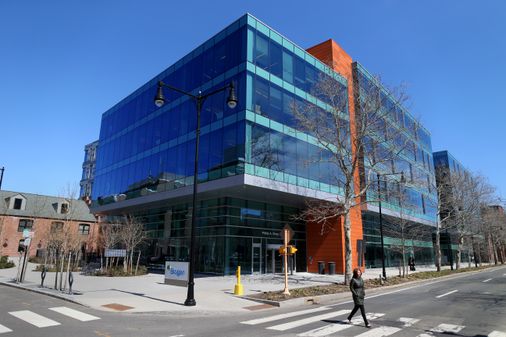