“All you need in this life is ignorance and confidence, and then success is sure.” – Mark Twain

Looking at the wild gyrations in the Nikola/Tesla EV complex reminiscent somewhat of ENRON in 2000, as well the continued “risk-on” environment thanks to better than expected growth expectations at least from the United States, when it came to selecting our title analogy we decided to steer towards a cheeky title analogy. Given that a confidence trick is an attempt to defraud a person or group after first gaining their trust, looking at the investigation surrounding NIKOLA following some short sellers reports, we think our title does indeed reflects the on-going late cycle situations were frauds like WireCard are finally being exposed. Confidence tricks exploit victims using their credulity, naïveté, compassion, vanity, irresponsibility, and more important of all “greed”. Researchers have defined confidence tricks as “a distinctive species of fraudulent conduct … intending to further voluntary exchanges that are not mutually beneficial”, as they “benefit con operators (‘con men’) at the expense of their victims (the ‘marks’)”. A confidence trick is also known as a con game, a con, a scam, a grift, a hustle, a bunko (or bunco), a swindle, a flimflam, a gaffle, or a bamboozle. As a reminder, the intended victims are known as marks, suckers, stooges, mugus, rubes, or gulls (from the word gullible). When accomplices are employed, they are known as shills. But, enough of these long references. We believe that fraud exposures in conjunction with these late cycle indicators such as dealmakers seeing $69 Billion of M&A in year’s busiest weekend according to Bloomberg with volume of deals announced in September up to $146 billion, which is 51% increase from the same period a year ago, and as well Banks as firing again a lot of employees, give us a 2007 feeling.

In this week’s conversation, we would like to look at late cycles indicators as well as what we think about the latest US tick up in inflation means to us in the on-going inflation/deflation raging debate

With banks around the globe having restarted cuts according to Bloomberg, taking gross losses announced this year to a combined 63,785 jobs, putting the industry on track to exceed the almost 80,000 disclosed last year, the biggest retrenchment since 2015 as per there article, this is giving us a 2007 feeling in conjunction with the very poor performance of financials so far in 2020 in both the US and in Europe: 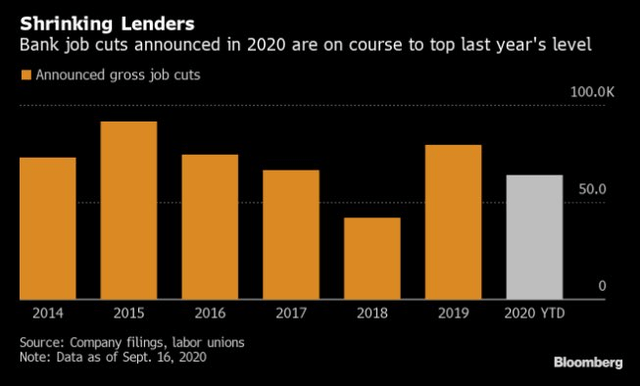 Homeowners have taken out ~$129 billion of equity through cash-out refinancing.

Hopefully these are mutually exclusive, or folks are literally gambling their houses away.” – Sentiment Trader – Twitter

With YTD returns in IPO leading the way, 2020 has really a 2000 feeling as per the below chart: 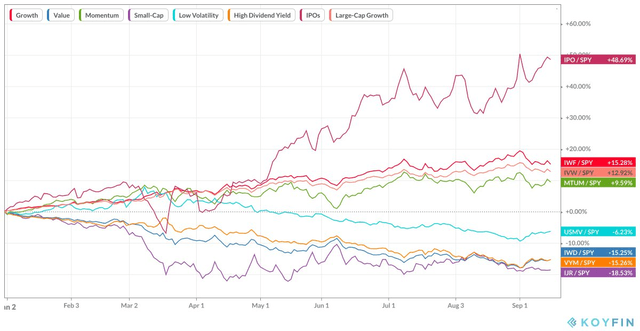 The latest IPO of Snowflake points towards more dizzying valuations in the TECH space. Data warehousing company Snowflake opened 115% above its IPO price, valuation reaching around $71 billion with $400m of LTM revenue and $340m of LTM losses. That’s nearly 100x earnings. For us, it feels a bit reminiscent of the famous infamous .com era of 2000.

‘What the wise do in the beginning, fools do in the end.’

Sure Snowflake IPO, the first ever US IPO subscribed by Berkshire Hathaway in almost 6 decades, is up ~1.5x from its issue price and 8x from its pre IPO valuation but it is valued at a really “cheap valuation” of 200x CY20E Sales. Berkshire Hathaway’s shares are worth $1.7B, up 2.2x overnight.

As well, money has been flowing out of the boring old NASDAQ-100 ETF $QQQ and pouring into the triple-leveraged version the $TQQQ as per Bloomberg: 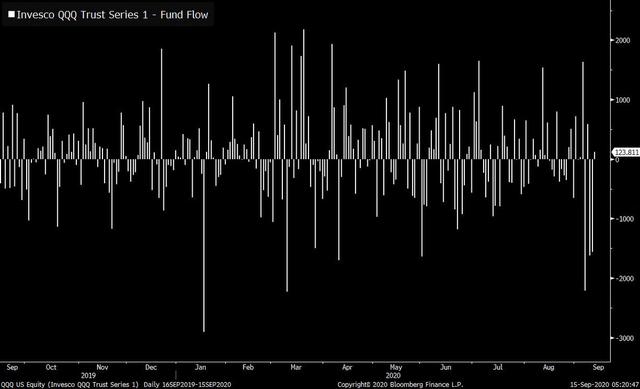 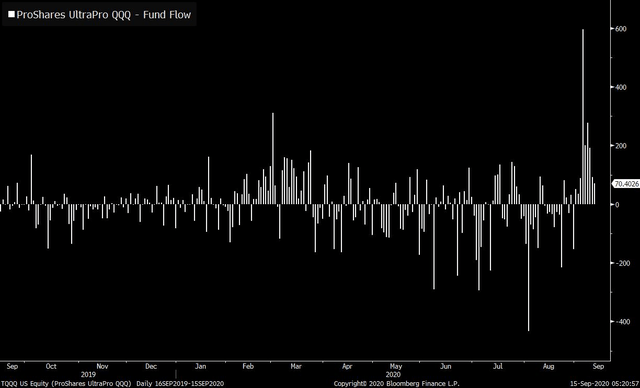 Speculation is indeed entering the “mania phase” as it appears.

Given the TECH sector is 2020 market darling, it seems more and more crowded and we believe instability is brewing: 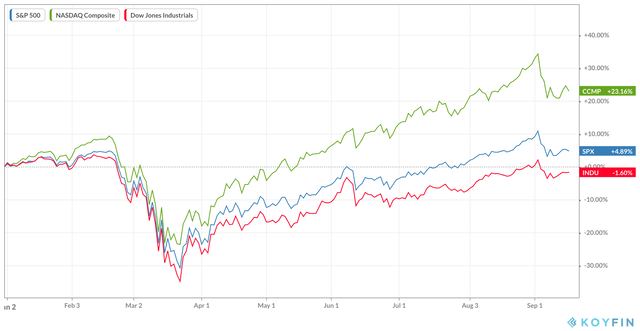 We talked in our recent musings about rising dispersion in credit as well as rising distortions thanks to central banks meddling with asset prices. The below chart from Bloomberg we thinks clearly illustrate the distortion part we are seeing:

“This year’s gap between $SPX best/worst sectors is unusually wide. TECH is up +27% and is the top-ranked sector. ENERGY is in last place, down -47%.

The differential of 74 points was the widest through Sept. 15 for any two sectors since 2000.” 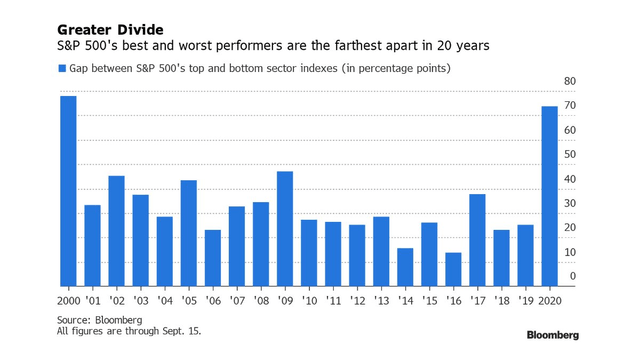 Of course with the additional gyrations in oil prices, defaults have been piling up at a rapid pace in the battered energy sector leading as well to some vicious goodwill write-downs in the process.

As we pointed out in our most recent conversation, US banks have been tightening business lending standards at the fastest pace since the Great Financial Crisis (GFC). This of course represents some serious headwinds going forward for the weakest link in US High Yield, namely the CCC rating bucket.

We voiced our concerns from a medium term perspective in our most recent post on the CCCs credit canary with looming surge in volatility thanks to US elections, but given the prevailing “risk-on” mood, credit investors continue to reach out for yield with CCCs yield grinding tighter towards tights of the year. 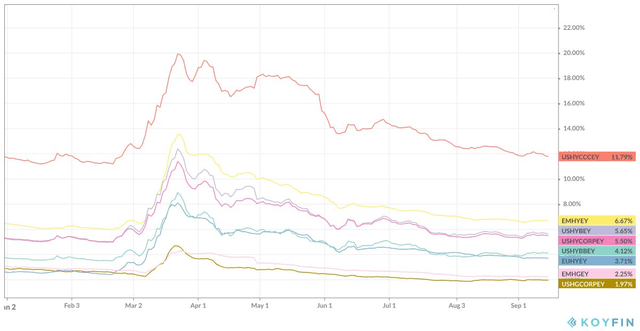 As CITI former CEO infamously said, you’ve got to keep dancing while the music is still playing, as it is all part of the “Confidence Trick”.

But, there is as well another cause for concern, in the sense that while US banks have been tightening business lending standards, credit demand as indicated by Bloomberg seems to be falling: 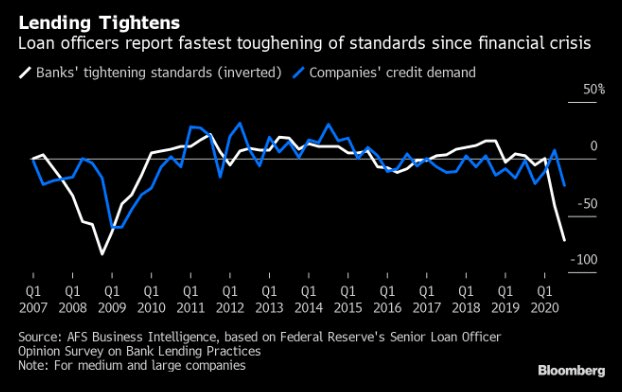 The greatest distortion is of course between Wall Street and Main Street as asset prices continue to rise towards stratospheric levels.

2020 has a 2000 feeling when it comes to the “Confidence Trick” given that last time U.S. equities were major portion of MSCI’s global equity index was nearly 2 decades ago and the current level isn’t far off from record of 61%.

Returning to the subject of our last post namely the rise in the inflation narrative given that it could potentially trigger another vicious sell-off, this is leading us to our next bullet point about the raging inflation debate.

• More food for thoughts on the inflation/deflation debate

In our last conversation we indicated that we were definitely paying attention to inflation expectations and the potential rise of inflation in 2021. 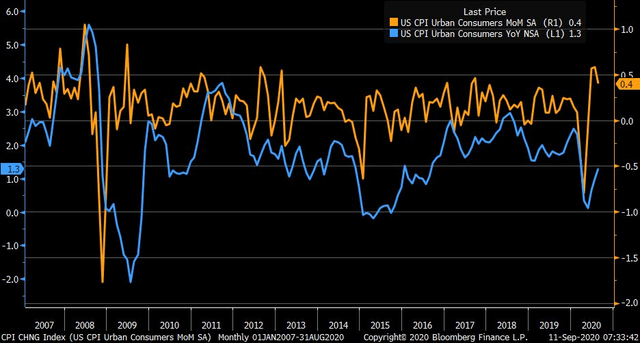 The below picture will definitely change in 2021: 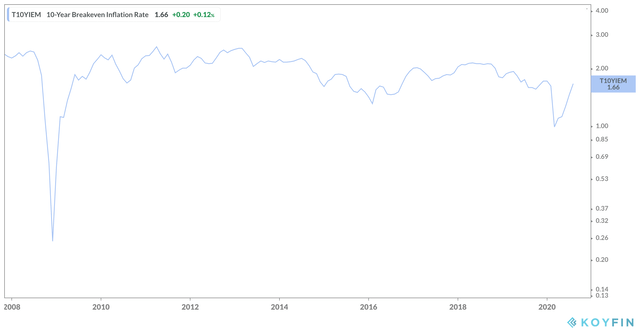 It seems the trend is your friend:

There is a growing divergence between US 10 year inflation and oil prices. That is why we are closely monitoring the weakness in oil prices!

The annual inflation rate for Covid-connected purchases is 1.85%, or a half percentage point higher than the Consumer Price Index, according according to Harvard Business School professor Alberto Cavallo: 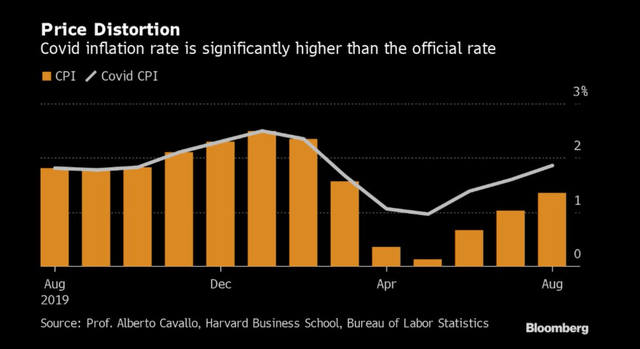 We agree with the below chart from Morgan Stanley, placing us into the “inflationistas” camp because as we have written many times in our musings we believe QE was deflationary, but, fiscal policies are inflationary: 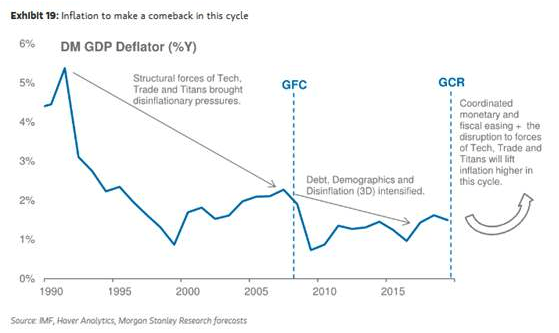 We have seen a new record high for NAHBhome Index; now at 83 versus a 78 estimate and in prior month. As per chief economist Robert Dietz, “lumber prices now up more than 170% since mid-April, adding more than $16k to price of typical new single-family home…suburban shift keeping builders busy”. As a reminder, the two largest housing components of the Consumer Price Index (CPI) basket are rents and new dwelling purchases by owner-occupiers, which together account for around one-sixth of the CPI basket. Price inflation in these two components is influenced by conditions in local housing and construction markets and can vary considerably by city. Inflation in rents and new dwellings have each averaged a little over 3 per cent in year-ended terms since 2002.

When it comes to the “Confidence Trick” played by the Fed in the most recent FOMC meeting where it said that interest rates are expected to stay near zero well into 2023, we can “confidently” say, they will stay “lower for longer” given these kind of “jedi tricks” or “con games” do not really work on us.

“Confidence… thrives on honesty, on honor, on the sacredness of obligations, on faithful protection and on unselfish performance. Without them it cannot live.” – Franklin D. Roosevelt

Fortnite: Where and How to Hack Stark Robots at Stark Industries 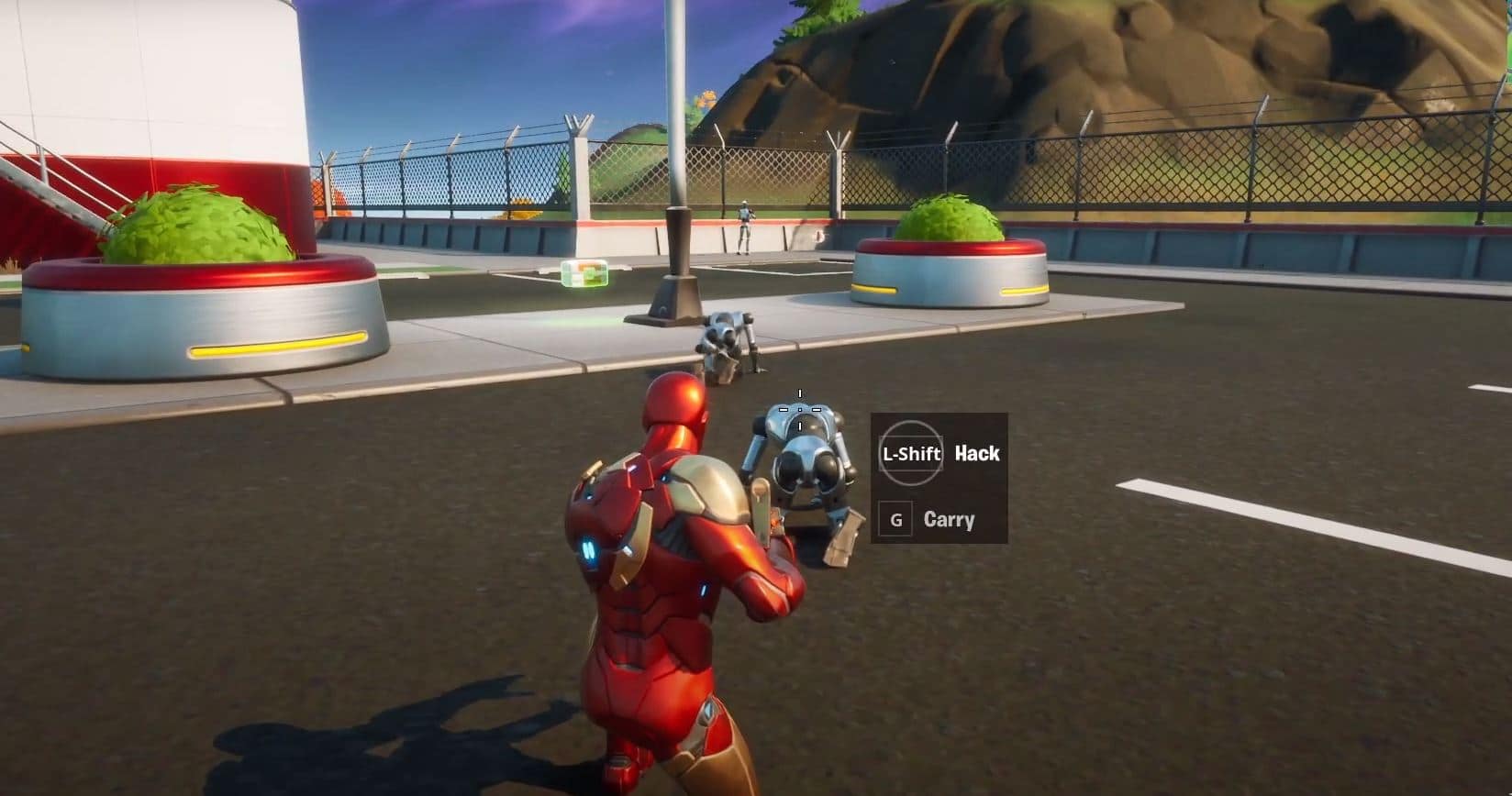