Buffalo-leather recliners and Dolan Geiman artwork in Ryan’s living room; Roy (left) and Ryan Seiders, with dog June in a quail rig; a table in Roy’s hallway, with a midcentury lamp and artwork by the Austin painter and sculptor Paul Meyer.

“Certain times of year, when you walk outside these walls, you better have your head on a swivel,” says Ryan Seiders, one half of the founding duo of the coolers-and-camping-stuff company Yeti. He and his brother Roy, the other Yeti founder, are ambling around the twin hunting lodges they had built at Paloma Ranch, a seventeen-thousand-acre spread of mostly raw land they bought a few years ago in far South Texas, a couple of hours south of San Antonio and minutes from the Mexican border. It’s rough country here—mesquite brush, huisache, prickly pear, relentless sun, rattlesnakes. The lodges and surrounding snake wall, from a distance; snake boots and a bootjack in Ryan’s mudroom.

Ryan gestures to the waist-high smooth white wall that surrounds the two houses and the pool between them: a snake wall, he explains. The reptiles can’t climb it. With eight young children between the brothers’ two families, there are often a lot of little people running between the houses and splashing in the pool. “You don’t want to have to worry about them.” Everything about the ranch reflects that utilitarian ethos. The homes themselves, which the families frequent for weekend getaways during deer season, are simple rectangular boxes with corrugated-metal exteriors and industrial-scale, steel-framed windows overlooking the landscape. Oil-field pipe frames the covered patio. Inside, the floors are nothing more than polished concrete. (“We just want to be able to come in here with our ranch boots on and not worry about a thing,” Roy says.) When nobody’s there, black metal doors slide down to seal off every entry.

And yet, if the lodges look at first glance like a pair of particularly nice sheds for heavy equipment, they’re decidedly homey as well. Credit Emily Seiders for that. She’s Ryan and Roy’s sister-in-law (married to brother Rick) and an interior designer in Austin whose work often blends organic shapes and materials with clean, modern architectural lines. That mix plays just right at Paloma Ranch, where the homes each have a long central hall flanked by five bedrooms, ending in a wide, loft-ceilinged living/dining/kitchen space that faces a wall of windows. Emily worked on the project with the architect Ryan Street, a frequent collaborator of hers—including on Roy’s and Ryan’s homes in Austin—and the brothers’ childhood friend. In another design team’s hands, the living areas might have felt severe, but here they function as a canvas for expressing the Seiders family lifestyle. What that means varies slightly between Ryan’s and Roy’s houses. (“Ryan’s look is more bohemian,” Emily says. “Roy is more earthy.”) But both homes include a stylistically wide-ranging selection of art, rugs, and furniture that, she says, shouldn’t work together but do because they’re naturally tied to the people and place. Emily says she chose many of the items—such as the hand-tooled-tin four-poster bed from Mexico in Ryan’s master bedroom—“to pay homage to the various cultures who have historically inhabited the region, from Spanish settlers to Native American tribes to the cattle barons of Texas.” 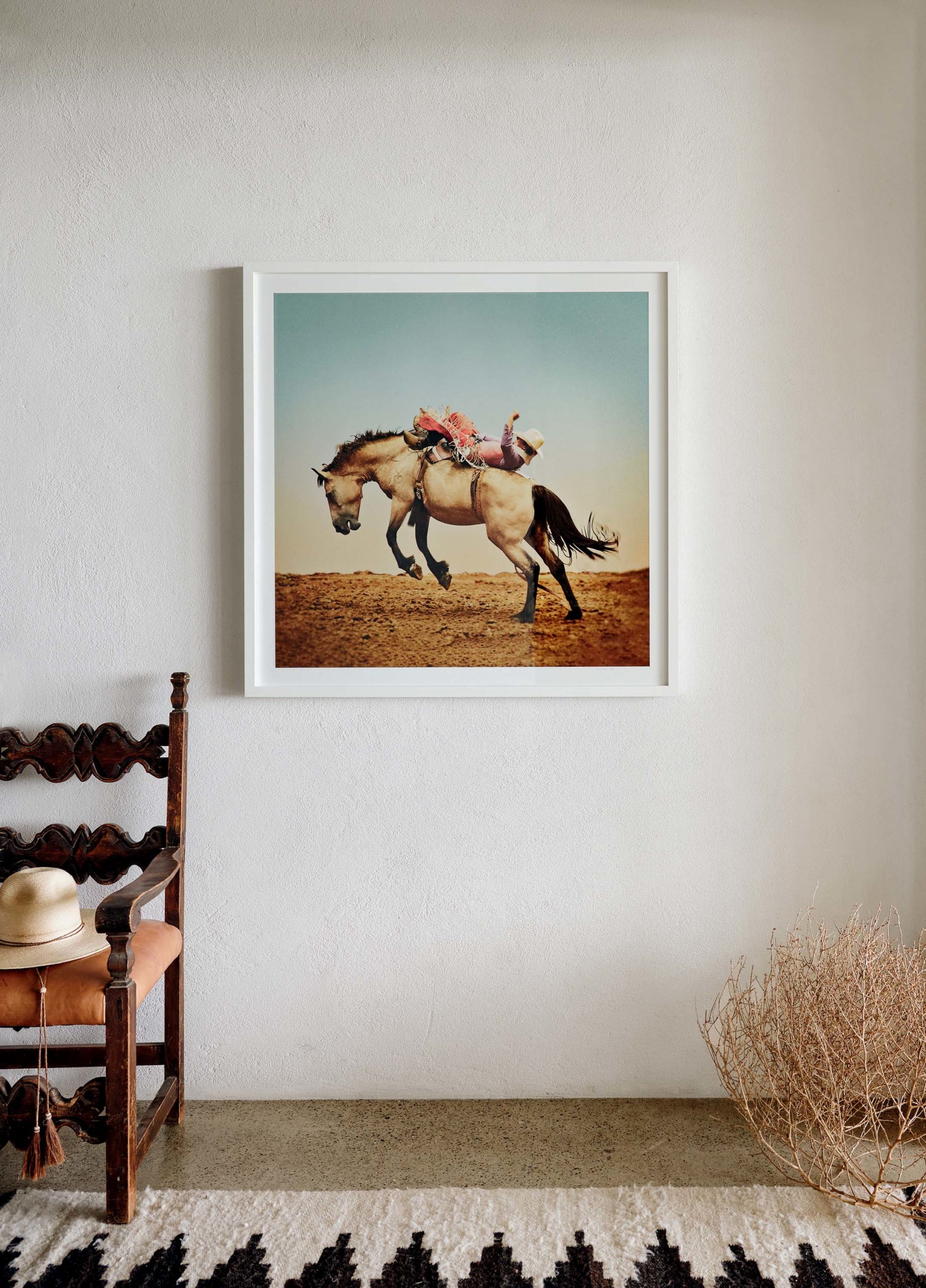 An image by the Dallas photographer Steve Wrubel, a vintage Spanish chair,
and a tumbleweed at Roy’s.

The houses each borrow from traditional Western decor—as in leather and antlers—but give it a contemporary profile. Rather than nailhead trim and overstuffed pillows in Ryan’s home, a pair of vintage buffalo-leather recliners feature the sleek lines of the Swiss design house de Sede. Cowhide-upholstered dining chairs sit atop colorful metal bases. In Roy’s living room, a mounted Spanish Fighting Bull hangs on one wall, opposite a glowing replica of the Paloma Ranch brand by the Austin neon-sign master Evan Voyles. The eclectic mix continues throughout each room at Roy’s. A red shuffleboard table; a painting of the local landscape by family member Jim Gingerich; a series of images taken by Texas’s official state photographer, Wyman Meinzer; mounted deer hunted on the ranch; arrowheads found on the property; two giant kitchen pendant lamps taken from a Belgian warehouse. One collection that perhaps best characterizes the ranch’s aesthetic: vintage chaps hanging in Ryan’s hallway. “We wear chaps out here all the time,” Roy explains, so he hopes he and his brother can add to the collection over the years to come. Given the amount of time everyone spends outdoors when they’re here, properly breaking in a few pairs shouldn’t take long. A windmill at sunset.

Days start early at Paloma, with a hunting party usually gearing up in the walk-in gun safes at the far end of each home’s central hallway. When they return, they unload the day’s bounty in the deer barn (complete with ceiling-mounted sliding game hooks that lead from a driveway into a walk-in freezer) just up a path from the houses. Then they join the rest of the family around the pool and outdoor lounge area, where the prevailing winds blow in from the southeast and keep everyone from melting. At some point a handful of guests might wander over to the shooting platform just down from the deer barn to shoot trap. Someone will be cooking by then, and eventually people will convene at the fourteen-person outdoor dining table, then retire to drink tequila around the firepit—and plan the next day’s hunt. For a couple of outdoorsmen who grew up hunting in the Texas Hill Country, where the deer are smaller, this piece of unforgiving country is the Seiderses’ version of a slice of heaven. They sold a controlling interest in Yeti several years ago and no longer have day-to-day involvement in the company, so they spend much of their time managing their land. “Ryan and I never thought we’d be fortunate enough to buy a place down here,” Roy says, “so when we got to that point—to be able to purchase a raw piece of land and make it our own—it was kind of a dream come true.” The shared pool and patio between the lodges.

Thu Sep 17 , 2020
TipRanks Morgan Stanley Bets on These 3 Stocks; Sees Over 40% Upside Did the stock market’s epic rally just need a little breather? The last few weeks have seen stocks experience their first meaningful correction since the bull market kicked off in March. Now, the question swirling around the Street […]