The Knox County Board of Health voted Wednesday night to close all restaurants and bars at 11 p.m. each night, as well as “bring your own” businesses, and to sharply limit the size of gatherings in a renewed push to control the COVID-19 pandemic.

© Calvin Mattheis/News Sentinel
People wait in line to enter Tapp’d on The Strip on Cumberland Avenue at 11:08 p.m. Saturday in Knoxville, Tennessee on Sept. 12, 2020. The University of Tennessee is asking students to follow COVID-19 safety measures, and Knox County bars are under order to stop serving alcohol at 10 p.m.


The new nightlife curfew levels the playing field for all establishments after the previous curfew of 10 p.m. applied only to bars and was generally considered to be unenforceable. The new prohibition is effective 12:01 a.m. Sept. 18 and will expire Oct. 1 unless extended. The measure passed 8 to 1.

The board also voted Wednesday night to restrict indoor public and private gatherings to 25 people of fewer. The restriction focuses on indoor public gatherings like concerts, conferences and sporting events  — not restaurants and bars — and it specifically does not apply to churches, funerals, private homes, nursing homes, protests, weddings or rights of way.

County Mayor Glenn Jacobs was the only board of health member to vote against both measures.

Board members cited the importance of limiting alcohol-fueled nightlife as a way to slow the spread of coronovirus in the community. Businesses on The Strip on Cumberland Avenue near the University of Tennessee at Knoxville loomed large in the discussion.

“I took a field trip Saturday night across the city late and was able to see how a number of areas and businesses were operating,” said board member Dr. Patrick O’Brien. “And I was to put it mildly, not happy with what I saw.”

“Knox News had a photographer out the exact time that documented what I saw,” he continued. The photos showed students lined up and being admitted into the bars well past the curfew.

Board member professor Marcy Souza pointed out that the Centers for Disease Control and Prevention had just released a study saying that found that people who tested positive for COVID-19 were twice as likely to have gone out to a restaurant or bar in the previous two weeks.

Just before the meeting, a coalition of restaurant and bar owners represented by the Isaacs Law Firm sent a letter to the board asking members to postpone the vote on a alcohol and food sales curfew.

“We are requesting that any decision making, or vote be immediately tabled until the affected parties have a meaningful opportunity to express their concerns to the Board of Health,” wrote attorney Gregory Isaacs on behalf of his clients.

Board members, however, were concerned about delaying the vote another week because their goal was to mitigate the spread before it gets worse.

“I read the letter, it’s a shot across the bow kind of letter but I’m not worried about its content,” said Knox County Senior Deputy Law Director David Sanders. “As far as the board doing anything illegal by proceeding with the agenda item my answer is no. It is not illegal.”

Jacobs, who has opposed previous COVID-19 mitigation efforts, including the mask mandate, spoke vigorously against the proposed order, saying bars and restaurants operate on thin margins and less late-night revenue would hurt them even more.

He said that the order would unfairly burden law enforcement with “confrontation.”

© Calvin Mattheis/News Sentinel
A doorman cards patrons at 11:16 p.m. Saturday before they enter Cool Beans on The Strip on Cumberland Avenue in Knoxville, Tennessee. The University of Tennessee is asking students to follow COVID-19 safety measures and Knox County bars are under order to stop serving alcohol at 10 p.m.

Knoxville Mayor Indya Kincannon told the board businesses on The Strip depend on UT being open and that if UT closed due to COVID-19, they would suffer even more dramatically. Kincannon said store owners had come to her to ask for restrictions.

The board of health meeting came the day after White House Coronavirus Task Force coordinator Dr. Deborah Birx met with county, city and university officials to discuss the local response to COVID-19. While Birx was effusive in her praise for the university, she was less so with county officials. She urged them to work comprehensively — and swiftly.

“We don’t want double standards,” Birx said. “We don’t want excellent student activities … of mask wearing and physically distancing on campus and then a sense that once they are in the community there is a different (required) activity.”

UT’s cases skyrocket in past weeks

COVID-19 cases at UT have risen sharply since classes resumed. On the first day of classes in late August, UT reported 105 cases of coronavirus. Cases multiplied by almost seven times by Sept. 10 to 672 cases. A residence hall recently was turned into an isolation dorm.

“We emptied out Massey Hall,” said UT Chancellor Donde Plowman. “And we tested every person in that hall. We found a 7-8% positivity rate. All asymptomatic students.”

Until now, UT had only tested symptomatic cases. Plowman said that asymptomatic students had been moved to isolation.

But there was some good news: Active cases have declined slightly this week. The university reports 499 cases as of its most recent update.

As the university’s COVID-19 cases spiked, so did the county’s.

The virus spread among students who live together or who have been flocking to The Strip for nightlife. The Knox County Health Department’s benchmarks, which track the progress of the pandemic using a color-coded traffic light system, shifted from a mostly safe “green” to mostly “yellow” or “red” beginning Sept. 9.

“We continue to see most of our new cases in school-aged up into college-aged young adults,” Knox County Department of Health Director Dr. Martha Buchanan said. “Six hundred fifty-six cases between Aug. 30 to Sept. 5, that’s a pretty significant increase.”

In September, through Wednesday, the county detected 2,105 new cases. For comparison there were 2,790 new cases detected in the entirety of August. The largest single day increase of cases, 225, occurred this week. The majority of these cases were in school-aged through college-aged people.

“It’s really that 14-22 year old age group that we see the most cases in our community,” said Buchanan. “We are doubling our cases quite rapidly.”

Data from the University of Tennessee Medical Center supports the county data. In a presentation to the board, member Dr. James Shamiyeh warned that across the Knoxville hospital district, case growth was on track to exceed both July and August. He said that Birx told him that college-aged cases should be treated like any other.

“(Birx’s) comment was that these people, these students, are mixing in the community and should be treated like any other,” Shamiyeh said. He pointed out the Knoxville hospital district was increasingly responsible for the case growth statewide.

© Brianna Paciorka/News Sentinel
Students past the Student Union during class change at the University of Tennessee campus in Knoxville on Thursday, September 10, 2020.

The board briefly discussed declining testing volumes across the county and state. Board members were worried that they were unable to capture the full picture of COVID-19.

“If anyone has any ideas on how to increase testing we are open to it but we haven’t come up with it,” Buchanan said. “Tennessee’s testing volume has decreased by 50% in the recent past.”

Board member Maria Hurt, a UT professor in the nursing school, pointed out Tennessee had gotten back on the White House Coronavirus Task Force red list, as had Knox County.

“Folks, we are in the red zone,” Hurt said. “The head of the White House Task Force doesn’t just stop by randomly in a city in the U.S. for tea and crumpets.”

Kincannon and Knoxville Police Department Chief Eve Thomas both participated in the public forum. Kincannon expressed her appreciation for the mask order and promised that the police would back their orders.

“The city of Knoxville and the Knoxville police department are ready and able to help with the enforcement of regulations,” Kincannon said.

Thomas said police had difficulty enforcing the curfew when it applied to bars only because it was impossible for officers to know if some establishments were considered a bar or a restaurant based on the percentage of sales that were alcohol vs. food.

Vincent Gabrielle reports on science, technology and culture, and their intersection in the Oak Ridge Corridor. Follow him on Twitter @VincentDGabriel. Make our community, our society and our republic stronger by supporting robust local journalism. Subscribe to Knox News at knoxnews.com/subscribe.

This article originally appeared on Knoxville News Sentinel: Knox County Board of Health orders bars and restaurants to close at 11 p.m.

Thu Sep 17 , 2020
ALLEGAN, MI — Locals will still have a chance to get their fair food fix this summer, even with the cancellation of the annual Allegan County Fair. The county fair canceled its main event for the first time since World War II, due to the COID-19 pandemic. In its place, […] 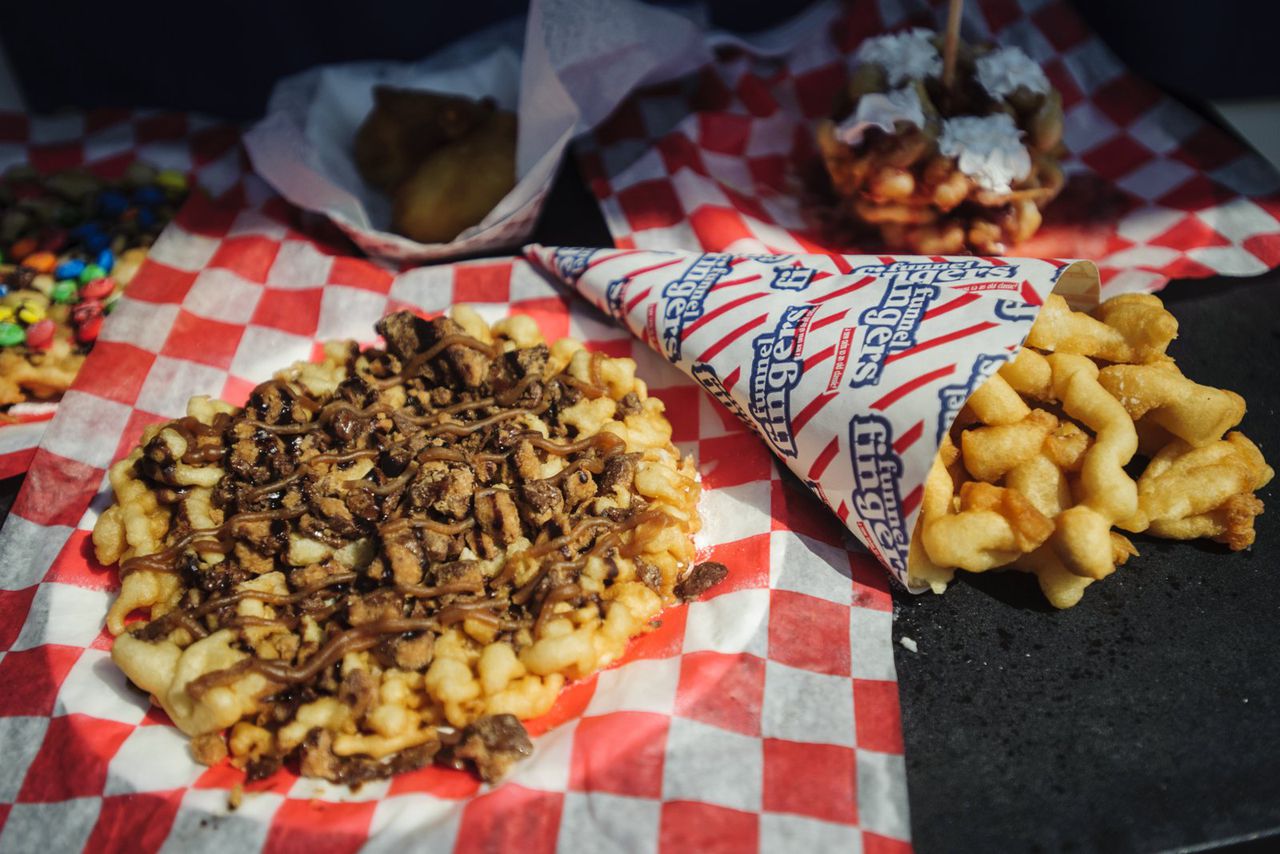