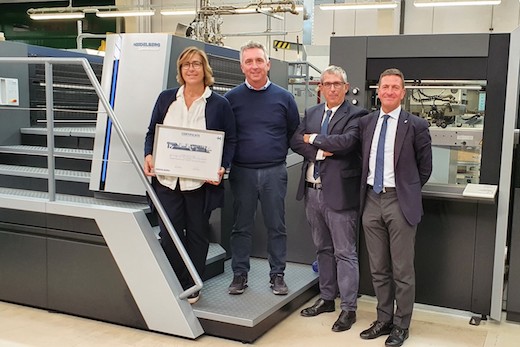 Grafiche Pizzi is a long-established Italian company based in Milan, which specializes in printed products for the pharmaceutical industry. In the last four years alone, it has invested more than fifteen million euros in Heidelberger Druckmaschinen AG (Heidelberg) solutions as a way of targeting sustainable growth in the pharmaceuticals business, in both the press and postpress segments. The latest addition is a new Speedmaster XL 106 two-color press with perfecting, equipped with the 400th CutStar roll sheeter.

“The biggest benefit CutStar offers us is the high level of flexibility when using lower paper grammages than in the past. We now process lightweight papers with 32 g/m2 compared with the 40-70 g/m2 paper normally used. Another plus point is the ability to optimize paper consumption by trimming the paper to the necessary formats, which reduces waste,” says Paola Pantaleoni. “The new Speedmaster, which prints at a speed of 18,000 sheets per hour and is equipped with CutStar, and the connection to prepress with the Prinect workflow and Polar cutting systems have significantly increased our production capacity.”

The company established in 1911 has operated exclusively in the pharmaceuticals segment for over 50 years, producing packaging inserts, brochures, and folding cartons. In 2013, it extended its production area of 3,000 square meters to over 10,000 square meters. Today, the 110-strong workforce produces 800 million inserts, five million brochures, and 100 million cartons each year. Grafiche Pizzi’s main markets are Italy, Switzerland, France, and Germany. Its turnover last year was over 22 million euros.

CutStar scores through cost and production advantages
With CutStar, cheaper rolls that are trimmed directly to the desired format can be fed inline to the sheetfed offset press. The CutStar can be integrated in all Speedmaster models from 50 x 70 cm to 70 x 100 cm. The required cut-off format can be adjusted anywhere between 40 centimeters and the maximum sheet cut-off length of the press. The roll sheeter processes a wide range of very lightweight paper grammages and extremely thin foils. The high level of automation and the control panel adapted to the press make the CutStar especially easy to operate.

“With the CutStar, we offer industrialized markets the ability to combine the lower costs of roll-fed stock and the flexibility of sheetfed offset printing with the shortest makeready times, and in this way achieve high productivity,” says Rainer Wolf, Head of Sheetfed Product Management at Heidelberg. “We are therefore continuing to invest in this important technology, and will be presenting an enhancement to it in the near future.”

Two thirds of all the CutStars installed worldwide are on long perfecting presses. A total of 75 per cent of presses with CutStar are in use in commercial printing, while the rest are in companies that print foils and thin materials. Several units are already installed in Italy, especially in printing companies specializing in labels and the pharmaceuticals segment. Their investments have often already doubled and tripled.

A creative rule change for the next presidential debate

Thu Oct 1 , 2020
President Trump and Joe Biden during the first presidential debate. (Getty Images) The presidential debate commission says it will change the rules for the next debate because of the un-presidential food fight that broke out Tuesday. I actually thought it helped bring out the personality of each candidate, but the […]