It looks bubbly, craggy or maybe even fluffy, but what is it?

It’s spray foam furniture, and you may have seen it go viral on social media platforms such as TikTok, Instagram and YouTube. Artists and DIYers alike have been spraying polyurethane-based foam on a wide array of household items, such as benches, couches, mirrors, shelves and tables. Interior designers have begun showing foam furniture in their work as demand for the unexpected look rises.

The foam mirror, also known as the “cloud mirror” or “popcorn mirror,” has become one of the most popular new items.

But the textured look of foam furniture has attracted varying opinions, ranging from disgust and curiosity to awe and praise.

“I personally didn’t find a huge love for them at first. I was like, this looks so strange, like it doesn’t look amazing,” said digital creator Drew Scott (not to be confused with the “Property Brothers” star) in a YouTube video that has more than 367,000 views so far. Scott then explained how he changed his mind and tackles the project himself, showing viewers his process.


“I’ve been seeing a lot of side tables and coffee tables and vases. And I actually have a vase that I did too,” Stockholm-based designer Gustaf Westman told TMRW via email. “I’ve been seeing a lot of really cool do-it-yourself things on the internet because of quarantine. Side tables are really cool because they just do the top and the side, and it just gives it that texture.”

On one of Westman’s Instagram photos of a foam-covered sideboard, reactions have been mostly positive. One commenter even wrote, “This makes me feel really weird but also it’s beautiful.”

Westman, 26, has been making art “for a long time” but only started selling his pieces two years ago. He created his first foam furniture piece in November 2019. “I had a small wood shelf (at) home that I didn’t have any use for. So i just thought if I could upcycle it in any way and that’s when I tried the foam. So it was kind of a coincidence that (it turned) out cool!” the artist said.

Westman working on one of his


Westman explained that he only works with recycled furniture to create the pieces and uses the foam in ventilated areas. “Always outside and using a long sleeve shirt and mask! I use a ecological foam so it’s toxic-free, but don’t want to have it on my skin so that is why (I use) the protection. I take the recycled furniture and then I do one first layer of foam. I’m not that precise on the first layer. Then I always do a second and sometimes a third layer to get the feeling I want,” he wrote.

Some DIYers say they first learned of the trend from Westman’s “popcorn” furniture series, prompting them to make their own. “I get a lot of questions about people copying me. But I don’t have a problem with that since it’s impossible for me to produce to all those people anyway. And I think people do their own design with me as inspiration, that’s cool!”


Interior designer Amanda Beaubien, 25, who recently started her own private design business in the Los Angeles area, had just moved into a new home when she discovered spray foam furniture.

“I was looking for a very large mirror that looked funky and different. The one I really wanted was over budget,” Beaubien recalled. “I saw something on Instagram in March or February of an influencer who had done a mirror and then she had done a couple other furniture items and so it really sparked something in me and I was like, I can make my own for under $200 … (within my) budget.”


“It looks complex, but then when you do it, you’re like, ‘Oh wow.’ It was an easy few steps that didn’t take much time. … It’s affordable, and the end result is so incredible. It’s so fun.


“Everybody that comes into my house is just in awe and they have a million questions, so I totally get it. I had a million questions and I had to wing it because I didn’t know anybody, so I was like, ‘Alright, we’re just gonna try this and see how it goes’ and it just turned out so over what I thought it was going to be. It was amazing.”

Beaubien spent approximately $75 for a secondhand mirror she bought online and about $7-8 for four or five spray foam cans. She has had experience working with foam before and said it took about 45 minutes to spray the border of her mirror that is over 70 inches tall. She has since made a smaller foam mirror for a client and customized it with pink spray paint.


“I made one for a client who loved it so much that I would love to keep making more pieces,” Beaubien said. “This is a cool, easy, personal item that you could have in your home … something foam is a custom piece and it’s specialized for your house.”

Rev Up the Food Truck?

Wed Sep 9 , 2020
Back in the early 2010s, food trucks had a moment. Trucks slinging everything from Korean barbecue to grilled cheese to crepes to ice cream pops hit the streets of communities across the U.S., capitalizing on low overhead and an increasingly adventurous consumer. Gradually the trend faded, and operators and […] 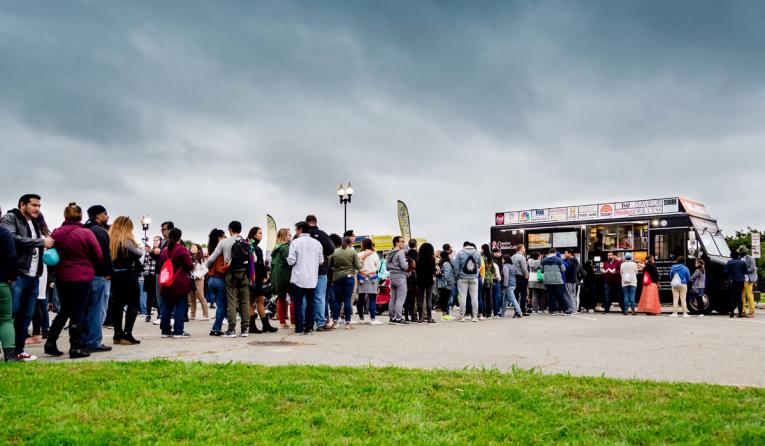