Gov. Kay Ivey has issued a state of emergency and closed Alabama’s beaches as Hurricane Sally slowly made its way to the Gulf Coast on Monday.

The storm has the potential to bring “dangerous and potentially historic flooding” for the Gulf Coast as well as heavy rainfall and possible tornadoes in central Alabama.

The National Hurricane Center said as of 1 p.m. Monday, the slow-moving storm was about 160 mile south east of Biloxi, Mississippi, moving about 7 mph. It’s expected to make landfall tonight or early Tuesday. Previously a tropical storm, Sally was upgraded to a hurricane shortly after 11 a.m. Monday.

Gov. Kay Ivey on Monday issued a state of emergency ahead of the storm.

“Bad weather is nothing to take lightly. Earlier today, I issued a State of Emergency because those on the Gulf Coast know a flood and heavy rains can be just as deadly as tropical winds,” Ivey was quoted as saying.

“We pray that Sally doesn’t do any harm, but we must be prepared just in case. As your governor, you have my assurance that every resource will be available if we need it. Be safe, Alabama.” 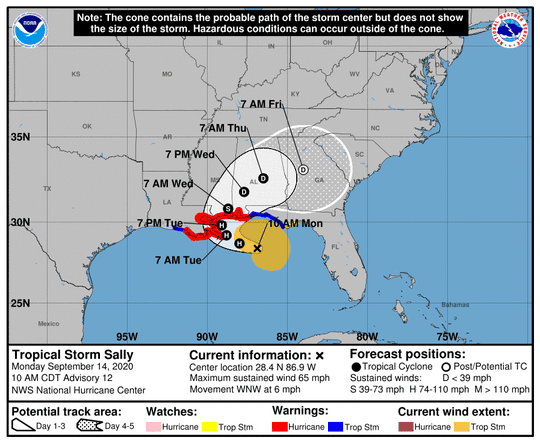 Tropical Storm Sally, expected to make landfall as a hurricane, will leave behind nearly a foot of rain in some central Alabama counties, flash flooding and possible tornadoes. (Photo: National Hurricane Center)

Hours later, Ivey ordered all Alabama beaches be closed by 3 p.m. and recommended the evacuation of non-residents and those who live south of Interstate 10.

“Alabamians are no stranger to tropical weather and the significant damage these storms can do, even though our state is not currently in the direct line of impact,” she said. “Locals will need to prepare their homes, businesses and personal property for immenent storm surge, heavy rain and flash flooding. I urge everyone to tune in to their trusted weather source, and pay attention to your local officials for updates regarding your area as they make further recommendations based off the unique needs of your community.”

The timing of the storm’s impact on the rest of Alabama is still uncertain, National Weather Service Meteorologist Daniel Martin said.

“It will move through central Alabama probably Wednesday and Thursday,” he said. “It’s possible it’ll linger into late Thursday then move into Georgia early Friday morning as a depression.”

While Alabama is not expected to take a direct hit from the storm, its force will be felt in the coastal portions of the state. The Gulf coast is currently under a hurricane, tropical storm and a storm surge warning with a possibility of 4 to 6 feet.

With a storm surge comes a “danger of life-threatening inundation, from rising water moving inland from the coastline, during the next 36 hours,” according to the National Hurricane Center.

“This is a life-threatening situation. Persons located within these areas should take all necessary actions to protect life and property from rising water and the potential for other dangerous conditions. Promptly follow evacuation and other instructions from local officials,” according to the center.

Southwest counties such as Mobile, Baldwin and Washington could see between 10 and 15 inches of rain, according to the National Weather Service.

If the storm slows down once it makes landfall, as it is expected to do, it could bring up to a foot of rain in portions of central Alabama which is under a flash flood watch, Martin said. The watch sweeps from the western Sumter and Choctaw counties to Calhoun and Cleburne counties in east Alabama slowly dropping less rain as it goes.

“We could see winds gusting up to 30 mph, but this will be a rain event for us,” he said. “Flash flooding is the primary concern and river flooding is a concern too.”

“This will be really big for our public works in the county because we are expecting 4 to 6 inches of rain,” Lolley said Monday.

Localized flooding and downed trees are expected, with the possibility of some tornadoes, he said.

“Be prepared. This is something that Tuscaloosa County citizens are used to. We’re used to flooding, trees down. This won’t be the first time this has happened. (If) you know you live in a low-lying area, use caution and prepare now. Do not wait until Wednesday morning when it’s raining hard to make your plans,” Lolley said.

Tuscaloosa Fire and Rescue’s swift water team has been on alert, he said.

The River Region likely won’t see an impact from Sally until Tuesday night at the earliest, meteorologist Rich Thomas of the Rich Thomas Weather Network said.

“We’re going to be on the east side of Sally’s track which is the worst side, the most active side,” Thomas said. “After it makes landfall it’s going to slow down tremendously and curve into Alabama.”

“It’s going to be a ridiculous amount of rain,” he said.

Along with the rain and a possible flooding, a few tornadoes are also likely.

“These tropical spin up tornadoes are very quick to spin up, are only on the ground for a minute or two, but can do a lot of damage,” Thomas said. “While most of these storms are in and out, this one will be poking along so it’s going to have a prolonged effect.”

Thomas said everyone should have a reliable weather app on their phone that can alert to possible dangers.

“Don’t rely on tornado sirens,” he said. “People also might want to go through their yard and pick up objects that could becomes projectiles, like patio furniture. Just stay weather aware.”

For the Etowah County area, the forecast is wet, but that’s the worst that is expected at this point.

WIth that level of rain, he said, flash flooding can’t be ruled out, even though Etowah County is not included at present in watches or warning for it.

Tomorrow's Laundry Will Send You T-Shirts and Hoodies Each Month

Wed Sep 16 , 2020
Each day you’re tasked with making countless decisions. But what to wear doesn’t have to be one of them. Because people will do that for you, and then for an extra dose of convenience, they’ll ship the clothing straight to your door. Like Tomorrow’s Laundry. It’s an online subscription label featuring high-end essentials […]