Roughly two weeks before Christmas, I authored my last Cisco (CSCO) article. In that piece, I stated that I believed the shares were trading above fair value, and in the summation, I made the following observations.

While Cisco is the dominant player in networking equipment, there is no reason to believe that segment will drive outsized gains in the immediate future. Furthermore, there is evidence that rivals are slowly eroding the firm’s dominant position in that arena. Migration to cloud services is a threat to Cisco’s infrastructure hardware.

I concluded by stating I was not a shareholder in Cisco, and I had no intention of investing in the company.

The stock has underperformed the market by nearly 16% since that article debuted.

Cisco is the largest manufacturer of networking switches and routers on the globe. While the company garners robust revenues from those devices, management seeks to diversify the business through software designed to provide recurring revenues via subscriptions.

Although that endeavor has met with some success, it did not prevent the stock from suffering its worst day in over a decade, plummeting by 11% following management’s weaker than anticipated guidance during the last earnings call.

There are reasons for optimism. The company surpassed management’s goals related to software, services, and subscriptions, while 5G and WebEx are seen by some as a means to drive future share price.

Nonetheless, Cisco has a decade long history of underperforming the market and providing anemic revenue growth.

A Brief Review Of Q4

So, what prompted the double-digit plunge in share value?

Despite the earnings beats, revenues were down 9%, non-GAAP net income dropped 5% YoY, and non-GAAP EPS fell 4% YoY. Total product revenue was down 13%, while Infrastructure Platforms reported a 16% decline. Total product orders were down 10% in Q4.

We saw declines across switching, routing, data center, and wireless, driven primarily by the weakness we saw in the commercial and enterprise markets.

So, despite beating analysts’ expectations, results were still less than stellar; however, the reason most provide for the sharp drop in the stock is management’s guidance for a revenue decline of 9% to 11% for Q1 2021.

Over the last ten years, Cisco shares appreciated by 94%, while the S&P more than doubled that gain.

Peruse the chart below for an understanding of the anchor that has weighed on the stock price. 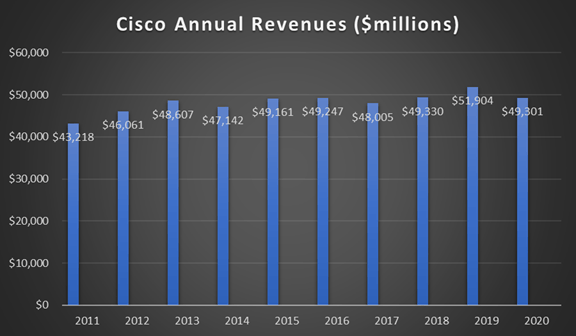 It is a story of a lost decade. Were it not for the company’s robust share buyback program, the lackluster history of the stock would likely be worse. One could argue the recent past portends continued malaise when assessing results from the last 8 quarters. 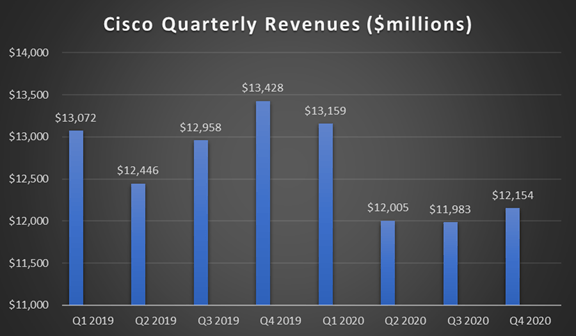 Now, consider the aforementioned guidance for a revenue decline of 9% to 11% YoY in the coming quarter.

Developments That Could Push The Stock Higher

Silicon photonics can potentially disrupt the costs related to optics by accelerating data throughput and increasing needed scale. The technology is touted as providing both pricing and reliability advantages. 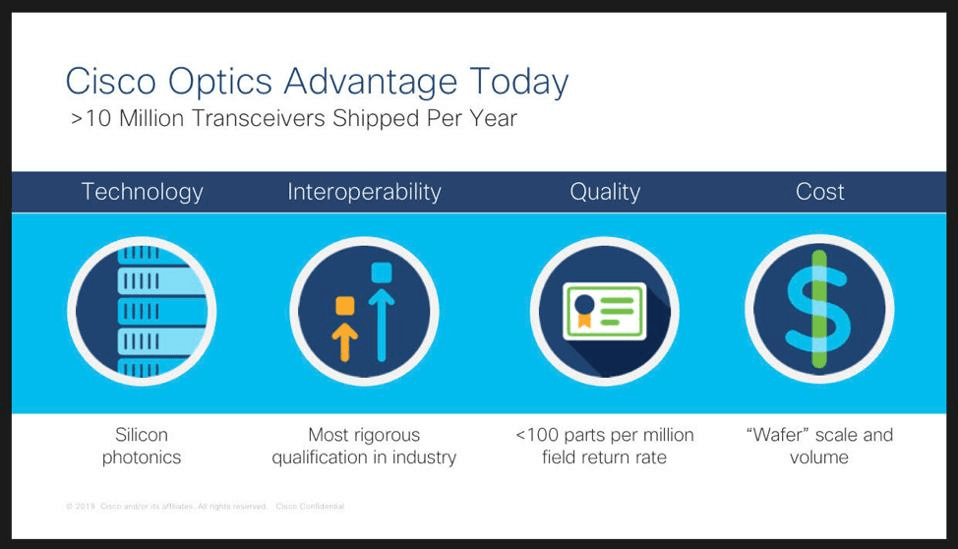 A second development touted by Cisco is the IOS XR7 operating system. The company claims XR7 improves network security and provides faster download speeds while requiring half as much memory. Some of the buzzwords used by the firm to describe XR7 are “increases network visibility” and “boots up faster.”

Those with a thorough knowledge of Cisco might question why I am showcasing the Luxtera acquisition and XR7, as these developments have been known since late last year.

That is precisely my point. Cisco management states these are important drivers of future growth. They have been presented as the cornerstone of an “Internet of the Future” strategy, and yet revenues and the stock price have dropped significantly since they were unveiled.

A third development may offer real hope, but I find it difficult to assess.

Silicon One is a chip designed to eventually increase performance to 25 terabits per second. The new router platform, the 8000, is based on Silicon One and the XR7 operating system. Cisco claims Silicon One provides twice the network capacity of other ASICS, 2X the power efficiency and 3X the performance of competitors chips.

There are those who claim that Silicon One is a game-changing technology. I am not an engineer or an IT professional, so I rely on extensive research and the perusal of the opinions of specialists in those areas to inform me of such developments.

In the past, I’ve found a great deal of chatter on the internet and among investors when companies provide monumental breakthroughs in tech or pharmaceutical products. I don’t see that with Silicon One. Consequently, I must believe Cisco enhanced the technology, but not to a degree that will provide a long-term competitive advantage.

I will add that the stock price since these developments took root echo my judgement.

The company does not disclose revenues form WebEx; however, it is a part of the software services in the applications division. That business provides about 11% of the firm’s sales. Consequently, it is reasonable to believe WebEx will not provide significant impetus for growth in the stock.

The company’s security business experienced significant growth, driven by a dozen acquisitions over the last decade. Although it witnessed a 10% increase, once again, that comes from a relatively low base of 7% of the firm’s top line.

One can argue that the software and services segments are a bright spot for investors. It is true those businesses have grown dramatically over the years. Cisco generated 51% of revenues from that source in 2020, exceeding management’s 50% target. At the same time, subscriptions reached 78% of the software businesses revenues, eclipsing the 66% target.

Unfortunately, those businesses have been growing for years and have only managed to stem the bleeding, so to speak.

Regarding the firm’s SaaS offerings, I ran a similar chart to the one below in my last Cisco article.

Cloud Market Share – a Look at the Cloud Ecosystem in 2020 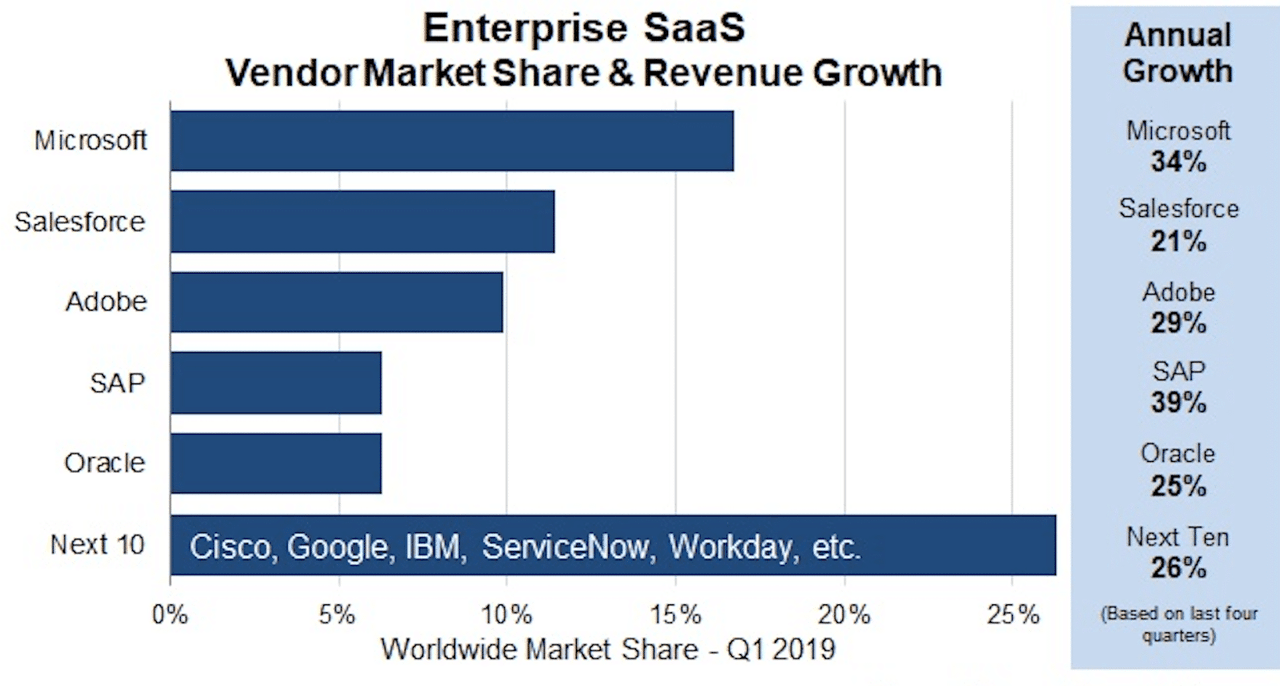 In the intervening nine months, the only change is that the share held by the “Next Ten” (which includes Cisco) dropped 2 percentage points.

Moving away from purely technological developments, I should note Cisco has minimal sales exposure to China. Consequently, investors need not worry about trade related downturns from that arena.

On the other hand, the company has a growing, symbiotic relationship with India. In FY 2019, revenues from that nation increased by 7% to $51.9 billion. The CEO has stated India will soon provide 10% of Cisco’s global revenue within five to ten years.

Cisco’s yield hovers around 3.5%, and the payout ratio is well below 50%. The 5-year growth rate is over 13%. There is every reason to believe the dividend is safe and will continue to grow at a relatively rapid pace.

A week ago, I provided an article on IBM (NYSE:IBM), a stock many compare to Cisco.

Both companies have been in the doldrums, underperforming the market, while other tech firms provide rich rewards to their investors.

Both firms have management teams that apparently failed to seize opportunities offered by the ever-changing tech environment.

Each relies on large, recurring, yet dwindling revenue streams.

However, I noted in the IBM piece that there has been a management change at IBM and a possible catalyst in the form of quantum computing that might revive that company’s fortunes.

Unfortunately, I can find no evidence for Cisco that points to a similar scenario.

Cisco is a serial acquirer, having purchased 63 companies since 2010 alone, yet those acquisitions have never been transformational.

As noted in this article, the growth that company executives claimed would stem from recent developments failed to materialize. Furthermore, management guides for lower revenues for the foreseeable future. The increase in software, services, and subscriptions merely matches losses in other businesses.

Consequently, I rate Cisco as a Hold.

However, I will add that I think it likely the shares will experience a low double-digit move to the upside (after which I suspect it will stall) that might work well for traders.

Furthermore, for investors unconcerned with subpar capital growth, with a relatively short lifespan, and who are interested in a safe, growing dividend, this stock will suffice.

However, count me as one who prefers investments with a better growth profile.

I hope to continue providing articles to SA readers. If you found this piece of value, I would greatly appreciate your following me (above near the title) and/or pressing “Like this article” just below. This will aid me to continue to write for SA. Best of luck in your investing endeavors.

A Federal Jobs Guarantee Will Not Solve America's Economic Woes

Sun Sep 13 , 2020
In the smart and whimsical 1993 political comedy Dave, the eponymous character is the owner of a temp agency who has a side gig impersonating the president. And when the real deal suffers a stroke, a cabal of White House advisers offer Dave his own temp job: playing the commander-in-chief until […]