Century 21 Department Stores LLC grabbed headlines last week when it confirmed plans to close all 13 of its stores and liquidate assets as part of a chapter 11 process.

In doing so, the New York-based company became just the latest in a string of major retailers to file for bankruptcy in 2020 — a year where virtually every type of brick-and-mortar business suffered due to the coronavirus pandemic.

But not all stores have to close due to bankruptcy. J.C. Penney Co. Inc., for example, was just sold to two of the country’s largest mall owners: Simon Property Group and Brookfield Property Partners. The deal wound up saving about 70,000 jobs and allowed the 118-year-old business to avoid liquidation.

Another M&A scenario saved J. Crew Group, which this week shed most of its debt via a deal with Anchorage Capital Group.

Per RetailDive.com, over two dozen retailers have filed for bankruptcy in 2020 so far and more are on the way.

Z score creator Edward I. Altman told the New York Times in June that this year will set a record for companies saddled with at least $1 billion in debt. And the number of bankrupt companies with debt of at least $100 million will be comparable to the record set in 2009 on the heels of the economic crisis.

Here’s a look at the other companies that went bankrupt in 2020:

Aldo Group: The shoe retailer, which has a chain of 700 stores and employed some 8,000 people, went bankrupt in May.

Bluestem Brands: The owner of the Fingerhut catalog went bankrupt and sold assets to lenders led by Cerberus Capital.

Brooks Brothers: The retailer, founded in 1818, filed for bankruptcy in July and was sold for $325 million to mall operator Simon Property Group and Authentic Brands Group in August.

Centric Brands: The company behind licensed brands like Calvin Klein, Tommy Hilfiger and Nautica filed for bankruptcy in May with $435 million of DIP financing.

G-Star Raw: The denim company, with more than 30 stores in its portfolio, filed for Chapter 11 in July.

GNC: The vitamins and supplements chain filed for bankruptcy in June with plans to close up to 1,200 stores.

Lucky Brand: The Los Angeles-based dungarees company went bankrupt and closed 13 of its 200 retail stores. It was sold in August for more than $140 million.

Modell’s Sporting Goods: The retailer sought bankruptcy protection in March due to diminished sales of sports apparel and millions in unpaid debts to vendors and landlords.

Neiman Marcus: The luxury retailer went bankrupt as a result of roughly billion in debt stemming from a 2013 private equity deal with Ares Management and the Canada Pension Plan Investment Board.

Roots USA: The company confirmed that it would shutter seven of its stores in a Chapter 7 bankruptcy process.

RTW Retailwinds: The New York & Co. owner plans to permanently close most, if not all, of its stores.

Stage Stores: The comany behind Palais Royal, Bealls and Goody’s (some 738 stores) opted for liquidation.

Sur La Table: The kitchenware company known for its in-store cooking classes will close 51 of its 120 stores.

Stein Mart: The discount retailer announced plans to close some 300 stores, citing $197.8 million in debt at the end of the first quarter.

Tailored Brands: The owner of Men’s Wearhouse has liabilities of up to $10 billion and will shutter about 500 stores.

True Religion Apparel Inc.: With 0 million in assets and liabilities, this is the second time in three years True Religion filed.

Tuesday Morning: The company will shut a third of its nearly 700 stores.

© 2020 Benzinga.com. Benzinga does not provide investment advice. All rights reserved.

Tue Sep 15 , 2020
Of all the things to crave during a global pandemic, airline food would seem very, very low on the list. But here’s Thai Airways to prove us all wrong. Diners eat at Thai Airways’ pop-up restaurant inside the airline’s Bangkok headquarters on Thursday. (Reuters/Chalinee Thirasupa) Thai Airways, the national carrier […] 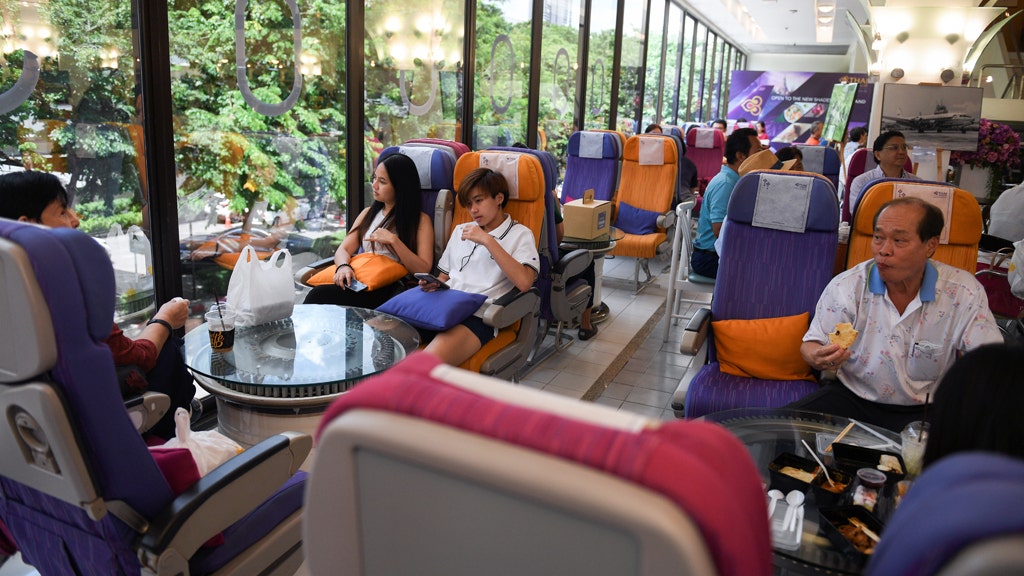