PROVO — It might take until Oct. 16 at Houston or Nov. 7 at Boise State for the No. 22-ranked BYU Cougars to sufficiently answer their critics, maybe longer if the red-clad Cougars or nationally prominent Broncos aren’t as good as they usually are.

© Nate Edwards/BYU photo
BYU quarterback Zach Wilson looks to pass in the second quarter of the Cougars’ game against Louisiana Tech at LaVell Edwards Stadium in Provo on Friday, Oct. 2, 2020.


It might not ever come, given a national perception that the Cougars have lined up a series of cupcakes after their sparkling 2020 schedule that included the likes of Utah, Minnesota, Michigan State and Arizona State — in September alone — was destroyed over the summer.

Oh, how fun it would be to watch these Cougars (3-0) attack that schedule.

“I would say being in the zone is a thing for a quarterback. I feel like anything we were trying to do tonight, we could do it.” — BYU quarterback Zach Wilson

It is also going to be fun watching Zach Wilson continue to improve — if that’s possible. His performance against the overmatched Louisiana Tech Bulldogs was a sight to behold.

The junior quarterback was simply flawless in the Cougars’ 45-14 thumping of a Louisiana Tech team that entered the game at empty LaVell Edwards Stadium with the reputation of having an opportunistic, if not entirely stout, defense.

“I would say being in the zone is a thing for a quarterback,” Wilson said. “I feel like anything we were trying to do tonight, we could do it.”

It was vintage Wilson, reminding an ESPN2 national audience that presumably hasn’t seen an entire BYU game this season because of blowouts of his pinpoint accuracy in the Famous Idaho Potato Bowl when he was a freshman.

He wasn’t a perfect 18-for-18 as he was back on the blue turf in Boise, Idaho, in December of 2018 against Western Michigan. But he was close — close enough to have former Heisman Trophy-winning quarterback Andre Ware (1989) proclaim: “We are watching one of the best football players in the country tonight.”

Wilson’s eye-popping numbers Friday: 24 of 26 passing for 325 yards and two touchdowns and a passer rating of 222.7. Oh, he also ran eight times for 43 yards and three TDs, including a 14-yard, spinning, twisting, tackle-breaking grind to the end zone to put a punctuation mark on one of the best single-game performances by a BYU quarterback in school history.

When is the last time a BYU QB had more TD runs that incompletions? Those are Army/Navy numbers.

“It was satisfying,” said Wilson, who has completed an unbelievable 84.5% of his throws this season through three games. “I feel like we were on the same page all night.”

Baylor Romney replaced Wilson with 4:58 left in the game — after a 17-play La Tech drive that took more than eight minutes off the clock — or Wilson could have challenged last week’s career-high of 392 passing yards against Troy.

“It is a huge part of the game to have a quarterback lead the way with his work ethic,” said BYU coach Kalani Sitake. “Everybody else is going to follow. Really happy with what Zach did, though. It doesn’t surprise me at all.”

Is BYU one of the country’s best teams? That might never be known. It has certainly looked every bit of a top-25 team the first three games. Consider that BYU has outscored its first three opponents — Navy, Troy and La Tech — by 124 points.

Wilson’s improvement isn’t up for debate. That was as clear as the full moon over the stadium. He credited his receivers, tight ends and running backs for making him look good, most notably freshman tight end Carter Wheat for making a phenomenal catch in the end zone on what looked to be a 50-50 ball.

“We have been really excited to get Zach going,” Sitake said, agreeing that this was as impressive an outing as the third-year starter has had.

Wilson did it all night Friday; he was the Cougars’ second-leading rusher. Remember last March when coaches were saying there was a starting quarterback competition? That’s laughable now.

It is premature to even mention Wilson as a fringe Heisman candidate after a month of play, especially considering there was no national buzz for the Corner Canyon High product back in August. That’s especially true since Clemson’s Trevor Lawrence might already have it wrapped up.

And some of the top prospects have yet to play a down. But name a player who has had a better first three games than Wilson.

“Everything is just clicking right now,” said receiver Gunner Romney. “Our quarterback is doing an amazing job of getting us the ball right now.”

Wilson didn’t come close to throwing an interception. He did fumble on a quarterback sneak, but it didn’t go as a turnover because Romney scooped up the loose ball and ran for a touchdown that was taken off the board because nobody but the fumbler can advance the ball after a fumble, the officials said.

Louisiana Tech had forced at least one turnover in 19 straight games entering the contest, a streak that led the nation.

Wilson threw an incompletion in each half — a sideline dump-off to a tip-toeing Dax Milne in the first half and a deep-throw attempt in the second half that was batted down at the line of scrimmage.

BYU was 4 for 4 in the red zone for touchdowns — correcting a problem that haunted Wilson and the Cougars last year.

“I would probably say I haven’t had a game like that ever,” Wilson said, comparing his night to what a hot 3-point shooter feels in basketball.

The Cougars took over with a minute, 36 seconds remaining at their 20-yard line; Wilson ran 15 yards to get the drive going. He threw frozen ropes to Neil Pau’u and Milne for gains of 12, 13 and 18 yards, then found Romney for a 22-yard touchdown.

It was a nice moment for Romney, who had a would-be TD taken off the board earlier in the half when replay officials ruled he stepped out inches away from the goal line.

To start the second half, when La Tech was still clinging to the hope that it could get back into the game, Wilson engineered another long drive to take away any doubt. The Cougars even overcame a first-down holding call.

“We can’t think we’re anything yet,” he said when it was suggested the Cougars couldn’t be blamed for wondering what might have been with the much more difficult schedule drawn up by athletic director Tom Holmoe years ago.

On this night, however, the Cougars, and Wilson, were all that and more.

Sat Oct 3 , 2020
MANILA, Philippines — “Can you do a better job?” This was President Rodrigo Duterte’s appeal to telecommunication companies in a televised speech Monday night. “With the classes going to start, our students will rely heavily on the use of electronics,” he said. “But the internal complaints — ever since telcos […] 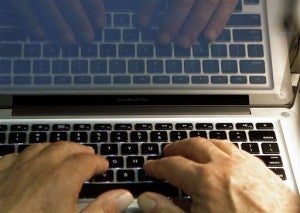