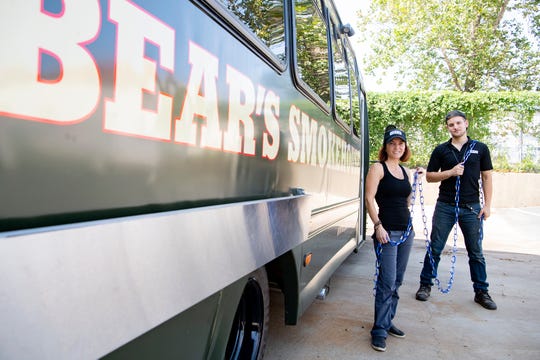 Cheryl Antoncic and her son, Collyn McDonald, stand outside of their future Bear’s Smokehouse Barbecue food truck with a chain of “Linked 4 Life” carabiners on Sept. 3, 2020. The carabiners are being sold for donations that promote the destigmatization of needing help with mental health and benefit suicide prevention programs. They are seeking to break a world record for the longest chain of carabiners at a Connecticut event on Mental Health Awareness day, October 10.  (Photo: Angeli Wright, ANGELI WRIGHT/ASHEVILLE CITIZEN TIMES)

In the coming weeks, a new food truck is coming to downtown Asheville, a preview of a brick-and-mortar restaurant to come.

Bear’s Smokehouse BBQ, which has four other locations in Connecticut, serves Kansas City-style barbecue and over-the-top sides like “Bear Balls,” or deep fried macaroni and cheese balls covered in cheese sauce and bacon.

But it also has a more serious built-in mission: Linked 4 Life, which was co-founded by Bear’s Restaurant Group and the Jordan Porco Foundation, aims to raise awareness for mental health issues.

Bear’s Smokehouse has no relation to the locally owned Black Bear BBQ in East Asheville, which distinguishes itself with a breadth of vegetarian-friendly fare for an otherwise traditional barbecue restaurant.

The Connecticut-based restaurant group will eventually open its first North Carolina brick-and-mortar barbecue restaurant on the South Slope, in the former Mike Byer Auto and Truck Repair at 135 Coxe Ave.

Until then, the majority of the menu will come from the Bear’s Smokehouse food truck, an extra-large shuttle bus that will be a permanent fixture on the Coxe Avenue property and will kick into gear in the coming weeks.

“Having a truck on that site is a way for us to utilize the space, while taking into consideration the uncertainty around COVID and giving us an opportunity to break into the market,” said Bear’s Smokehouse co-owner Cheryl Antoncic, who moved to Asheville two years ago to start the expansion process.

Cheryl Antoncic and her son, Collyn McDonald, are renovating their future Bear’s Smokehouse Barbecue at the site of a future permanent location on the South Slope. The restaurant, which already had locations in Connecticut, will serve us Kansas City style barbecue. Antoncic said about the move to the mountains that Asheville has the values she was looking for when it comes to supporting local businesses and community. “I love it here so why not move here,” she said.  (Photo: Angeli Wright, ANGELI WRIGHT/ASHEVILLE CITIZEN TIMES)

COVID has slowed the restaurant’s progress. But it hasn’t slowed Antoncic’s main mission to spread awareness of Linked 4 Life locally.

What is Linked 4 Life?

Antoncic and her team created the foundation after a Bear’s Smokehouse manager died of suicide last year, but the issue of mental health has factored into the restaurant owner’s life for a while.

“As a teenager, a woman I was very close to — my softball coach — died by suicide,” she said. “And it was the single most thing that affected my life thereafter, and my compassion for people who have struggled through life and felt there was no help for them and felt hopeless.”

The carabiner is also a visual reminder of interconnectedness, she said. “The blue carabiner supports breaking the stigma of mental health. We’ll keep the chain going, and the conversation going.” 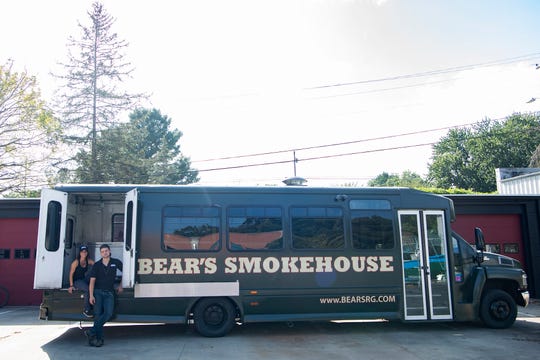 Cheryl Antoncic and her son, Collyn McDonald, are renovating their future Bear’s Smokehouse Barbecue at the site of a future permanent location on the South Slope. The restaurant, which already had locations in Connecticut, will serve us Kansas City style barbecue. Antoncic said about the move to the mountains that Asheville has the values she was looking for when it comes to supporting local businesses and community. “I love it here so why not move here,” she said.  (Photo: Angeli Wright, ANGELI WRIGHT/ASHEVILLE CITIZEN TIMES)

That’s particularly important now, she said, as the pressures of a pandemic weigh heavily on people already burdened with mental health issues.

Using data from a nationwide mental health survey, The Centers for Disease Control  said the number of people experiencing symptoms of anxiety disorder in the second quarter of 2020 rose 300% over the same time period in 2019. Symptoms of depressive disorder grew fourfold.

The US National Library of Medicine National Institutes of Health says at least 90% of people who die by suicide showed symptoms of a mental health condition.

Antoncic said simply reaching can help, since isolation can exacerbate feelings of hopelessness. But COVID, with its shutdowns and stay at home orders, has isolated people even further.

The Linked4Life website offers resources for people who need help now, some of which are listed below.

“You have to do what feels counterintuitive and connect and link up, and that’s what Linked 4 Life is trying to show people,” she said.

Antoncic is working to get locals on board with her mission. Here’s how:

Local restaurants, retailers and other groups can create teams to collect donations, creating a chain of carabiners for a unified Asheville Team chain.

A registration fee of $300 buys 100 carabiners. The Asheville chain will be added to a larger chain, debuted at a World Mental Health Day kickoff event Oct. 10 at the Dunkin’ Donuts Park in Hartford, Connecticut.

During the event, Linked 4 Life will attempt to break the Guinness World Record for the longest chain of carabiners. The goal is 11,000.

All proceeds will go toward the purchase of more carabiners to keep the chain of hope going, and benefit the lifesaving programs of the Jordan Porco Foundation.

Text: Connect with a trained crisis counselor to receive free crisis support via text message: Text HOME to 741741 or Text NAMI to 741741.

Are you a teen who wants to talk to someone who understands, like another teen? Text TEEN to 839863.

Mackensy Lunsford has lived in Asheville for more than 20 years, and has been a staff writer for the Asheville Citizen Times since 2012. Lunsford is a former professional line cook and one-time restaurant owner.

Mon Sep 14 , 2020
MUSKEGON HEIGHTS, MI – Activists will rally together in Muskegon Heights this weekend to protest police brutality, memorialize those who have been killed in police shootings, and register voters in West Michigan in preparation of the upcoming November election. © Alison Zywicki | [email protected]/Alison Zywicki | [email protected]/mlive.com/TNS Scenes from the […]