ALEXANDRIA, VA — Two chefs from Alexandria restaurants appeared on Food Network’s “Chopped” on Tuesday night, and one pulled off a win.

Chef Chris Edwards of newly opened Hank & Mitzi’s Italian Kitchen competed on the Sept. 29 episode titled “Want a Gnocchi Sandwich.” Chopped is a show where chefs must use mystery ingredients to create a three-course meal.

“The whole experience was very intense and the sheer pressure of competing at this level really caught me off guard,” said Edwards in a statement after his win. “The first time that clock started ticking… it was such a surreal moment: my instincts and love of cooking just took over and was left hoping my dish would turn out for the best!”

Mimi Huynh, chef-owner of Vietnamese restaurant Sunday in Saigon, was the other Alexandria chef competing on Tuesday’s episode. Both restaurants hail from North Old Town. Sunday in Saigon opened in 2017, bringing regional cuisines from Vietnam to Alexandria. Hank & Mitzi’s Kitchen is the reimagined Italian concept of Hank’s Pasta Bar opened in August by chef and restaurateur Jamie Leeds.

The “Chopped” episode aired at 9 p.m. on Tuesday, the same time as the first presidential debate between President Donald Trump and Democratic candidate Joe Biden. If you miss the “Chopped” episode, check back for the full episode online.

Weekly US jobless claims fall to 837,000 as layoffs persist

Sat Oct 3 , 2020
In Massachusetts, more than 24,500 individuals filed new unemployment claims, up about 1,800 from the previous week. Nearly 11,000 more sought benefits under the federal Pandemic Unemployment Assistance program, which provides aid for gig workers, independent contractors, and others who are not eligible for standard state unemployment. There were about […] 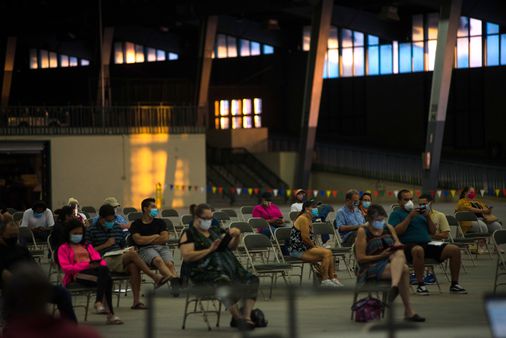